Were you beaming with pride watching the Paralympics? Because I was. 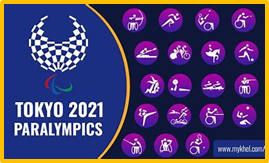 I feel after the confusing times we have had the past 18 months; we were all glad that the games were able to go ahead. It gave me a rush of energy to be able to push myself as much as some of the Paralympians.

I think the determination and training that the amazing Paralympians showed us is outstanding, the fact that they are inspiring so many children and young people to be proud of their disability, build resilience and realise that you can do anything. You just have to find ‘your way’ to do it.

The wording for the advertisement was very clever too ‘It’s rude not to stare’ was clever. As a child you are told not to stare at someone with a disability but now it’s more than ok for all the attention to be on them. To celebrate their ambition, commitment and success.

This just reminds me; you can do anything you put your mind to. Determination and passion really help when trying something new.

It didn’t go unnoticed that team GB got the second highest number of medals in the games with a whopping 124 medals overall with 41 of them gold.

I love the story of Dame Sarah Storey. She started off as a swimming star and then moved to cycling. Now she’s a national track champion, this shows me that trying new things benefits you and hard work pays off.

Check out this video

This website uses cookies to improve your experience while you navigate through the website. Out of these, the cookies that are categorized as necessary are stored on your browser as they are essential for the working of basic functionalities of the website. We also use third-party cookies that help us analyze and understand how you use this website. These cookies will be stored in your browser only with your consent. You also have the option to opt-out of these cookies. But opting out of some of these cookies may affect your browsing experience.
Necessary Always Enabled
Necessary cookies are absolutely essential for the website to function properly. This category only includes cookies that ensures basic functionalities and security features of the website. These cookies do not store any personal information.
Non-necessary
Any cookies that may not be particularly necessary for the website to function and is used specifically to collect user personal data via analytics, ads, other embedded contents are termed as non-necessary cookies. It is mandatory to procure user consent prior to running these cookies on your website.
SAVE & ACCEPT